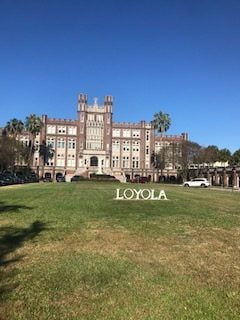 New Orleans is a city full of buildings teeming with history and cultural significance. You can find buildings in the French Quarter as old as the city itself and residents with stories passed down through generations of New Orleanians. From the St. Louis Cathedral to the Superdome to the various college campuses, practically everything in this city has its own meaningful story. Loyola University New Orleans is one such campus, and you can quickly get to it with a charming streetcar ride from the Blake Hotel.

It Started with the Jesuits

Jesuits came to New Orleans in the early 1700s and may even be responsible for getting the sugarcane industry started in the state. Their ministry thrived on a plantation purchased from the former governor for about 40 years before being banned from the French colonies in 1763. Seven Jesuits returned to New Orleans in 1837 at the urging of the Bishop of New Orleans.

By 1847, the Jesuits purchased a small piece of land in downtown New Orleans and opened the College of the Immaculate Conception two years later. However, downtown was quickly becoming overcrowded, so the Jesuits sought land in the city’s suburban uptown area.

The belief is that Fr. Albert Biever was tasked with finding this land. Reverend John O’Shanahan gave him a nickel and sent him on his way via the streetcar to find the perfect place for the college. Rev. O’Shanahan then purchased the land across from Audubon Park in 1886. It stretched from St. Charles Avenue to the Claiborne Canal and still stands proudly on St. Charles today.

The Transition to Loyola University

Established in 1904 as Loyola College, Loyola University New Orleans is fondly known as LOYNO by its students, faculty, staff, and many in the city. It is a Jesuit institution, one of four universities in the country named after Saint Ignatius of Loyola. You can find the other three Loyolas in Chicago, Baltimore, and Los Angeles.

When Loyola College first opened, it was just a building- and a church- strong. However, only a few years into its operation, the college was growing in size and needed more space. The Marquette Association for Higher Education and its ladies auxiliary ensured that Marquette Hall would accommodate the growing student body. This beautiful red brick building can still be seen from St. Charles Avenue today, standing at the back center of the horseshoe behind a statue of Jesus Christ.

Eventually, the College of the Immaculate Conception became a college preparatory school, and its college programs went to Loyola College. Soon after, Loyola College became Loyola University after receiving a university grant from the state in 1912. This grant gave the university more room to expand its education as well as its physical space. In the early 1910s, both Thomas Hall and the McDermott Memorial were erected. LOYNO then absorbed the New Orleans College of Pharmacy, opened its School of Dentistry, and its School of Law. Today, only the programs in the School of Law remain.

The campus continued to expand throughout the rest of the 20th century and is still expanding today. The campus added dormitories, and new buildings developed as a result of growing programs. The sports complex grew out of the need for team practices and student recreation. There are even two several story parking garages now!

The campus even made its way to the corner of Broadway and St. Charles in what used to be St. Mary’s Dominican College. This section of the university is known as the Broadway Campus and today houses two dorms, the law school, offices, and an activities center.

LOYNO prides itself on educating the whole person, as is Jesuit tradition. Students must take a whole host of core classes, including two philosophy classes, a world religions course, and a course on Christianity. LOYNO accepts students regardless of faith, merely hoping to turn out worldly and well-rounded individuals.

Today, the student body is around 5,000 individuals strong, made up of both undergraduate and graduate students. The university is split into five specialized colleges: Music and Media, Arts and Sciences, Business, Law, and Nursing and Health. Students have a chance to take a wide variety of courses, not just limited to their major, and can experience the fun of the city while in college.

Many out-of-town students enjoy things like king cake, Mardi Gras, and a second line for the first time while at LONYO. They get a chance to enjoy the beauty of the city around them, like Audubon Park, located conveniently across the street.

LOYNO is always giving tours to prospective students, though just give the university a call, and they’re likely to accommodate a tour for someone new in town looking to explore the campus. This Jesuit institution’s history and beauty is only a short streetcar ride away from the Blake Hotel New Orleans! Make sure to save some time during your stay for a visit to the impressive Loyola University.