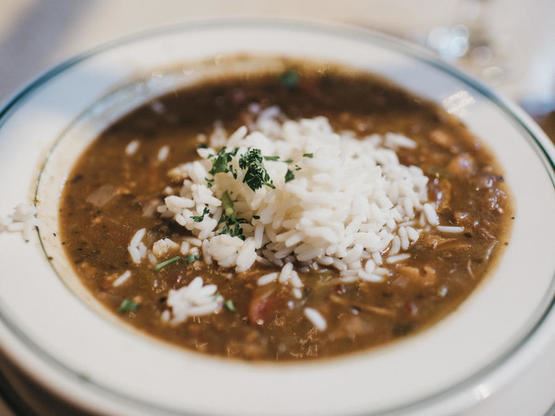 When it comes to food, no one does it better than New Orleans. On Thanksgiving Day, New Orleans locals enjoy many of the traditional Thanksgiving favorites, like turkey, stuffing, and cranberry sauce. However, it’s also not uncommon to find a few Big Easy favorites among the side dishes.

Whether it’s a starter of oyster soup, a tray of muffulettas, or a hearty side of our featured New Orleans favorite, gumbo, you’re sure to have more than enough to eat when you celebrate Thanksgiving NOLA style.

A Brief History of Gumbo

Gumbo is synonymous with New Orleans cuisine, but it’s actually a dish that can be served in various ways, reflecting a myriad of cultures. Some of the most popular gumbo in NOLA is Creole or seafood gumbo, but gumbo in general dates back to the early 1800s.

The actual word gumbo is derived from a West African word, “kingumbo,” meaning okra. In fact, in early versions of the dish, okra was the main ingredient, serving as a thickening agent. Over the years, in addition to its African roots, there have been significant influences from a vast array of cultures, including French, Spanish, Caribbean, and Native American, all mixing together to create a dish that is as multi-dimensional and fascinating as the cultures it represents.

In NOLA, Creole gumbo features a roux, a thickener made from equal parts flour and fat, thanks to French contributions to the dish. Today, depending on where you enjoy your gumbo, you’ll notice it takes on the distinct flavors of local ingredients, along with the unique flair of the chefs who prepare it.

Make Your Own Gumbo

Here’s a Gumbo recipe with a Thanksgiving spin, courtesy of Zatarain’s®. Fix it for Thanksgiving day, or use your leftovers to whip it up the day after; either way, it’s sure to be delicious! Plus, between prep and cook time, you’ll have it ready to eat in less than an hour!

In a large saucepan, brown the sausage over medium-high heat, then add the onion, bell pepper, celery, and garlic. Stir while cooking for about three minutes. Then, stir in the stock, rice mix, and the bay leaf.

Bring everything to a boil, then reduce the heat to low, cover, and simmer for about 15 minutes. Finally, add the turkey, and cook everything for an additional 10 minutes, stirring occasionally. Before serving, sprinkle with the green onions. Makes approximately 9 cups.

If you prefer to let someone else do the cooking, head to one of these restaurants for some of the best gumbo in the French Quarter.

Antoine’s — If you’d like to enjoy your gumbo along with a little fine dining, then this is the place for you. Antoine’s is the oldest family-run restaurant in the country, established in 1840. This means it’s celebrating its 180th birthday this year! The Creole seafood gumbo is a menu favorite, as is the signature dish, Oysters Rockefeller, which the restaurant has featured since 1889.

No matter what you decide to serve up this Thanksgiving, one thing is for sure; you won’t be able to put down your fork because it all tastes so good! Here’s wishing you a very Happy Thanksgiving from the heart of New Orleans!