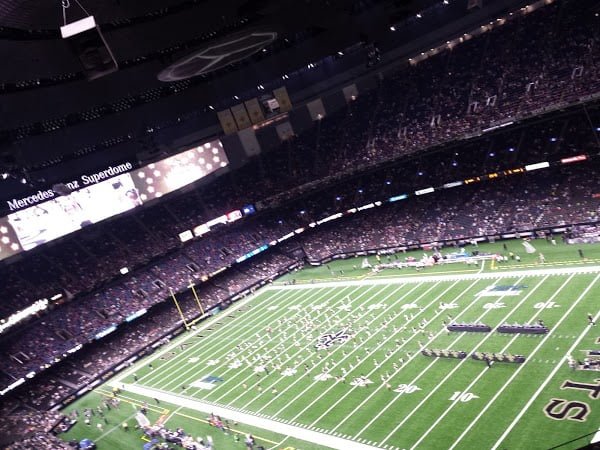 Saints fans from near and far have some familiar faces and some new boys in black and gold to cheer for in 2022. It’s undoubtedly a different vibe, with Sean Payton and Drew Brees no longer standing at the helm. But, that doesn’t change the heart of what has been dubbed by many as “America’s Team.”

The team earned that designation after their impressive rally following Hurricane Katrina and their Superbowl XLIV win (sorry, Cowboys). Here’s what you need to know about the new Saints team in NOLA.

The Saints Have A New Head Coach
After Sean Payton announced his retirement, Dennis Allen stepped in as the 17th head coach for the Saints on February 8, 2022. Allen already had experience with the franchise, having served on the coaching staff for 12 seasons.

He’s coached the Atlanta Falcons, Denver Broncos, and the Oakland Raiders (head coach). He was on the coaching staff for the Saints from 2006 to 2010, returning to the franchise in 2015.

Who Is the New Quarterback for The New Orleans Saints?
Jameis Winston is the new starting quarterback for the Saints. Back-up QB is Andy Dalton, with tight-end Taysom Hill stepping into the role occasionally, which reflects his comprehensive skills.

Jameis Winston signed with the Saints in 2020 after five seasons with the Tampa Bay Buccaneers. He played his first year as a backup for Drew Brees. Currently, Winston has become the 8th passer to reach 5,000 passing yards.

Andy Dalton comes to the Saints after one season with the Chicago Bears. Before that, he spent a season with the Cowboys and nine seasons as the starting quarterback for the Cincinnati Bengals.

Taysom Hill is in his 6th season with the Saints, officially a tight end, but seen in numerous roles on the field. He often steps in as quarterback, often running the ball in for a touchdown.

Stand-Out Newcomers to the Saints in 2022
Several newcomers are on the scene, along with some familiar favorites like Will Lutz, Michael Thomas, Alvin Kamara, and Cameron Jordan.

Tyrann Mathieu joins the Saints for his 9th season in the NFL as a free safety. He played his first five seasons with the Arizona Cardinals, then one season with the Houston Texans. Before returning to his hometown of New Orleans to join the Saints, he spent two seasons with the Kansas City Chiefs.

Safety Marcus Maye spent his first five seasons in the NFL with the New York Jets. Signing with the Saints kicks off his 6th season with the National Football League.

After four seasons with the Miami Dolphins and three with Cleveland Browns, Jarvis Landry begins his 8th NFL season with the Saints. The wide receiver is no stranger to New Orleans; born in Convent, LA, and a graduate of Lutcher High School and LSU.

Chris Olave makes his NFL debut as a wide receiver with the Saints. He played for Ohio State, where he set a program record with 35 touchdown receptions.

Ready to catch a game? Book your stay at The Blake Hotel New Orleans, so you’re near the action. It’s close to the Superdome, so you can walk or catch a streetcar and be there before you can say, “Who Dat!”